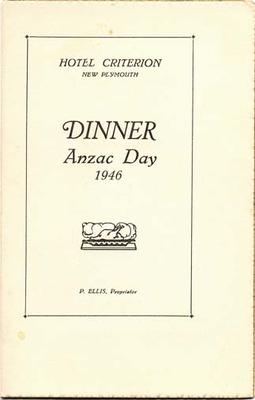 Description
A selection of menus from New Plymouth Restaurants and cafe's and several menus from shipping lines.
See full details

Menu. Royal Visit 25 February 1977. Held at the Bell Block Hotel and hosted by the City of New Plymouth.

3. Menu for the Waiwera Luncheon. To commemorate the first visit of an Ocean Liner to the Port of New Plymouth. Wednesday 21 March 1917.

6. Menu. Banquet to celebrate a great Liberal victory. The return of a Liberal member for each of the four electoral districts of Taranaki. Drill Hall, New Plymouth. 13 February 1903.