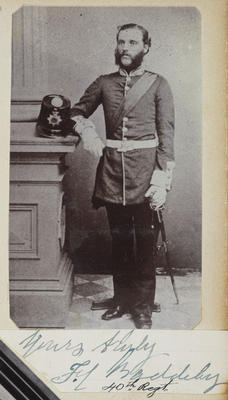 Production date
Circa 1900
Description
Copy photograph of Major Frederick Clinton Herman Stuart Baddeley, 40th Regiment. Baddeley (1831-1907) came to New Zealand in 1863 and, with his father Major-General Baddeley, served in Taranaki. He is shown wearing full military uniform with a sword on his left. He has his right arm resting on a pedestal with his hat sitting next to his arm. Baddeley has a moustache and full sideburns. The photograph is included on page 30 of William Francis Robert Gordon's album "Some "Soldiers of the Queen" who served in the Maori Wars and Other Notable Persons Connected Herewith".
See full details