Biography
"Mr. George Alfred Adlam, J.P., of Oakura, was born in West-bury, Wiltshire, England, in the year 1842. He is the son of Mr. Nathaniel Adlam, a farmer, and was educated in his native place. After having been two years in the Cardiff ironworks, he joined the 43rd Regiment, and went with it to India. In 1863 he came to New Zealand by the ship “lady Jocelyn,” and early the following year, after some skirmishing at Drury, a detachment of the 43rd was ordered to Tauranga, where it took part in several severe engagements. The regiment removed to New Plymouth in November, 1864, and again saw active service, and Mr. Adlam was slightly wounded at Warea. In March, 1866, when the regiment was ordered Home, Mr. Adlam purchased his discharge, and was employed by the late Mr. George Curtis. Shortly afterwards he leased a farm adjoining his present property, of about 400 acres, of which the greater part is freehold. He has his own creamery and butter factory, and produces about 300th of butter per week from sixty cows. At Pungarehu Mr. Adlam for some time carried on a store, from which he supplied the Armed Constabulary, and settlers of the surrounding district, and bought butter and shipped it to Sydney and Melbourne. For eleven years he was a member of the Taranaki Education Board; for nine years a member of the Taranaki County Council; for seven years chairman of the local school committee, and for several years he has been a member of the Taranaki Charitable Aid Board. Mr. Adlam holds the New Zealand war medal. In 1895 he was made a Justice of the Peace. In the year 1869 he married the daughter of Mr. John Sefton, of Ulster, Ireland, and has surviving, out of seventeen children, eight sons and five daughters." See The Cyclopedia of New Zealand [Taranaki, Hawke's Bay & Wellington Provincial Districts]
http://nzetc.victoria.ac.nz/tm/scholarly/tei-Cyc06Cycl-t1-body1-d1-d27-d60.html#name-417212-mention 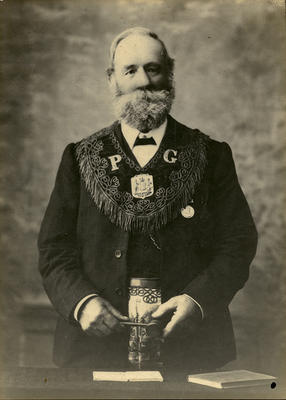