Biography
John Bell Thomson was baptised on 5 February 1835 at Westminster, London, England. He was the oldest of four children born to Eliza Willcox and her husband, Adam Thomson, an architect and surveyor. John Bell Thomson disregarded his father's wishes that he study law and instead travelled to Australia to seek his fortune on the Victorian goldfields. Joining the police force of Victoria, he became a detective and was stationed at Bendigo.

After the Southland province of New Zealand was established in 1863, Commissioner Thomas King Weldon appointed Thomson to head a detective branch and to start a Southland police gazette, similar to those already published in Victoria, Otago and Canterbury. In July 1863 Thomson arrived in New Zealand with one other Victorian Police Force detective. The new two-man Southland Detective Branch set about identifying Australian criminals who had arrived in Invercargill. In August Invercargill citizens were treated to an example of 'Victorian' detective work. Twenty-two alleged sly-groggers were charged as a result of assistance given by two informers employed by the police. It was clear that such offenders were no longer to receive the licence to which they thought they were entitled. People who believed that the police should be lenient in these cases were joined in their protests by law-abiding citizens who considered that the policing methods used were unacceptable.

A new era of policing had begun in Southland, but by June 1864 the province's treasury was so depleted that the second detective was discharged and Thomson lost the designation of detective in charge. By the end of 1865 further retrenchment forced the abolition of the position of detective. On 18 January 1866, at the Royal Hotel, Tay Street, Invercargill, Thomson married Annie McCrostie: there were to be 11 children of the marriage. Thomson was granted a year's leave without pay from the Southland Provincial Police, beginning in February 1866; as a parting gesture he carried out raids on 'houses of ill fame' in Invercargill.

He then travelled to Dunedin and was quick to accept a position in St John Branigan's detective branch of the Otago Provincial Police. By 1 January 1867 he had become detective in charge. On Branigan's appointment as commissioner of the New Zealand Armed Constabulary Force, in December 1869, Thomson transferred to that force, becoming New Zealand's first detective inspector. In the new position he had special responsibility for the investigation of sales of arms and ammunition to North Island Maori at war with the government. This proved to be a difficult job, and required much travelling.

After the establishment of the unified New Zealand Constabulary Force in 1877 Thomson became the inspector in charge of the Auckland district, a position he held from 1878 until 1887, after the formation of the New Zealand Police Force. He then transferred to take charge of the Wellington and Marlborough district. The New Zealand Times noted his transfer in an editorial, remarking that he had long had a reputation as one of the ablest and smartest police officers in the colony 'if not the ablest of all'.

Commendation from the press during and after the 1890 maritime strike, for his work in maintaining order and detecting crime, helped Thomson to keep his position during a period of retrenchment in 1891. In 1893, after receiving numerous tributes from Wellingtonians, he transferred to New Plymouth, where he had responsibility for the Wanganui and West Coast district. While he was based at New Plymouth, 19-year-old Robert Wallath, known as 'The New Plymouth Highwayman', held up several hotels. He was finally caught in the Criterion Hotel after holding up the White Hart Hotel for 15s. and a bottle of whisky. He was apprehended by Harold Thomson, the son of John Bell Thomson. Wallath received a sentence of eight years' penal servitude but was released as a result of public pressure after serving only half his term, and died in 1960, a respected citizen.

Thomson's long and distinguished police career was notable for several reasons. He was the leading detective in two professional police forces in New Zealand in the 1860s, and then became the first detective commissioned officer and the first former detective to command a police district. He died at Patea hospital on 1 March 1896, as a result of apoplexy which occurred during a tour of stations in his district. Thomson was frequently praised for his energy and efficiency: this zeal may have been a factor in his death. He is buried in Te Henui cemetery, New Plymouth.
- Dictionary of New Zealand Biography 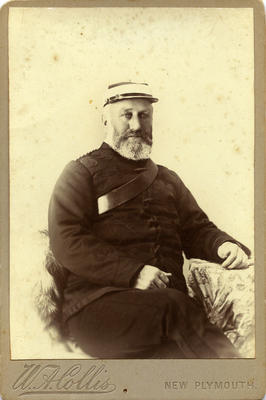