Biography
Kiri Te Kanawa gained legendary status almost overnight after her sensational debut as the Countess in Le Nozze di Figaro at the Royal Opera House, Covent Garden in 1971. From then, she moved rapidly into the front rank of international opera, and has become one of the most famous sopranos of this century. At the time of her operatic debut she was already an experienced concert and recording artist, and equally at home in front of the cameras as on stage. Continuing to develop as a recitalist, she is now a much sought-after singer in a wide variety of musical contexts.

Since that memorable Figaro, she has mastered a large repertoire from the classics of opera to the art songs of French, German and British composers, and a great treasury of contemporary popular music captured on the EMI Classics label. Releases include The Kiri Selection, a disc of popular songs, released in September 1992; Kiri Sings Kern, a disc of songs by Jerome Kern; Heart to Heart, in which she performs well-known love songs with Malcolm McNeill and Kiri Sings Gershwin, with John McGlinn. She has also released discs of Italian and French Opera arias; the role of the Marschallin in a recording of Strauss' Der Rosenkavalier, conducted by Bernard Haitink and the role of the Waldvogel in Wagner's Siegfried, also conducted by Bernard Haitink, as part of EMI Classics' celebrated Ring cycle. A recital at The Barbican, London in 1989, which included music by Mozart, Canteloube and Gershwin was released on VHS and Laserdisc. Kiri Te Kanawa also sang the soprano solo, Mary Dee, in the world premiere performances of Paul McCartney's Liverpool Oratorio in Liverpool Anglican Cathedral (released on CD, VHS and Laserdisc) and the role of Tatiana in EMI Classics' recording of Eugene Onegin.

Late 1996 saw the release of Our Christmas Songs for You, an album of popular carols and traditional seasonal songs also featuring Thomas Hampson and Roberto Alagna. Following this truly international celebration, EMI Classics released a recording entitled German Opera Arias with the Philharmonia Orchestra conducted by Julius Rudel in September 1997 and in October of the same year, Kiri sings Berlin, a disc of songs by Irving Berlin conducted and arranged by Jonathan Tunick.

Kiri Te Kanawa was born in New Zealand and carries the exotic blood of native Maori aristocracy. By the time she was twenty she had won the major vocal prizes available in the South Pacific, and had also started her recording career - unusual for a prima donna in any era. After moving to London and studying at the London Opera Centre, she was engaged to sing a Flower Maiden at Covent Garden. Sir Colin Davis' attention was caught, and the young Kiri Te Kanawa was marked for Mozart's Countess, after first appearing as Carmen in Britain and New Zealand.

She has appeared at venues both vast and intimate including Glyndebourne, Tanglewood, Ravinia, the arena at Verona, the Hollywood Bowl, the festivals of Aix-en-Provence and Salzburg, the desert outback of Australia. As a soloist at the wedding of HRH Prince Charles in St Paul's Cathedral in 1981 she faced one of the largest direct telecast audience of any singer in history (estimated to be over 600 million people) and her fame spread fast. 1990 saw another record when, during a tour of Australia and New Zealand, her outdoor concert in the city of Auckland attracted a crowd of 140,000. As the dawn of the new Millennium began in New Zealand, she sang a special concert on the beach in Gisborne which was broadcast to 55 countries.

Created a Dame Commander of the British Empire in 1982, Kiri Te Kanawa has been conferred with honorary degrees from the Universities in Oxford, Dundee, Warwick, Auckland, Waikato, Nottingham, Chicago, Durham and Cambridge. She is also an honorary fellow of Somerville College, Oxford, and Wolfson College, Cambridge, and was invested with the Order of Australia in 1990. In the 1995 Queen's Birthday Honours List, she was awarded the prestigious Order of New Zealand. After twenty-five years at the forefront of musical life, in 1994 Kiri celebrated her 50th birthday, culminating in a spectacular Birthday Concert at the Royal Albert Hall, London.

Dame Kiri continues to perform in opera houses, concert halls and arenas throughout the world and in November 1999 released a new album ìMaori Songsî which is her most personal album to date, presenting songs from her childhood which evoke the magic and mystery of her homeland New Zealand.
Source: http://www.nzmusic.com/artist_bio.cfm?i=230 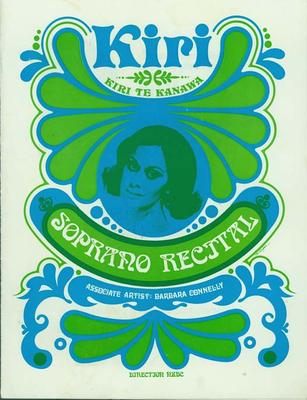