Biography
Often described as 'the painter's painter', Paul Hutchinson has steadfastly refused to follow trends in painting. Completely self taught, he has been working full-time as an artist since he was 17, developing the skills and techniques of painting and continually exploring new mediums, most recently reviving the ancient technique of painting in encaustic wax - ground pigments mixed with molten beeswax and resins and applied hot to the canvas.

Paul Hutchinson was born in 1958 in Middlesbrough, England. His family emigrated to Canada in 1962. Hutchinson was encouraged to paint and draw by his father, who painted watercolour landscapes. After several years the family moved back to Britain. Hutchinson enjoyed painting and drawing at school. In 1974 his family emigrated to New Plymouth, New Zealand. Hutchinson enrolled in an architectural draughting course at Taranaki Polytechnic but preferred to sketch. In 1975 he left Polytech and began painting with the support of his parents. He joined the Taranaki Society of Arts in 1976 and exhibited in their annual exhibitions. His first solo exhibition of work was at the Taranaki Society of Arts in 1977. Around this time he started to paint in what he describes as a "hard-edged realism" style. Hutchinson was part of a group of artists that formed the Taranaki Artists' Co-operative (TACO) and they held the first "Renonsense" art exhibition and mini arts festival. In 1981 he won on the TSB Review at the Govett Brewster Art Gallery and in 1982 he won the Montana Art Award. Hutchinson was taught screen printing techniques by several artists, including Michael Smither. He worked in the studios at King Street with Michael Smither and Tom Mutch and says, "I found this time instructive - seeing other artists' working methods." In 1984 he met Dale Copeland and started to work with collage. Their daughter Toby was born in 1985. The following year he took time off painting to work on the family's house and to reassess the direction his art was taking. Around 1987-1988, Hutchinson moved away from his hard edged realism style and started using thicker impasto and painted with white lead. He also became interested in the work of Lucien Freud. In 1989 he had an exhibition with Dale Copeland, Roger Morris and Marianne Muggeridge called "A Couple of Artistic Pairs" at the Govett Brewster Art Gallery. In 1991 Hutchinson became a part time tutor in oil painting for the Art Start programme. He was commissioned to paint several large murals for the Taranaki Base Hospital psychiatric ward and worked with both staff and clients of the ward on the project. Around 1994-1995, Hutchinson spent two months in Europe studying art. On his return he and Dale Copeland set up the Virtual TART internet site to promote the work of Taranaki artists. He also became interested in the ancient tecnique of encaustic wax painting, combining the technique with collaged material printed out from the early internet. He exhibited at the Lincoln Center New York and, from this show, was invited to exhibit work in "The Unbearables" Arts Festival in New York. From 1997 he exhibited several large figure paintings in Lorne, Australia, and had exhibitions throughout New Zealand. He was a finalist in the Biennial National Portrait Competition during the years 2000-2010. In 2006, Hutchinson began the painting-a-day project. He produced small postcard paintings of everyday objects and exhibited and sold from an online blog postcardfrompuniho.blogspot.com. In 2006 he won first prize for painting with his large diptych of his parents' portraits in encaustic at the Taranaki Art Review. He also won first prize for painting in watercolour at the 2007 Taranaki Art Review. He showed with Anne Holliday in an exhibition titled "Life is an Everyday Thing" in 2010. Several of Hutchinson's paintings were exhibited in "Renegade: Taranaki's Independent Art Groups 1960-Now" at Puke Ariki in 2011. Hutchinson and Copeland exhibited in a joint exhibition, "Through a Glass Darkly", at Real TArt Gallery, New Plymouth, 1-15 August 2012. 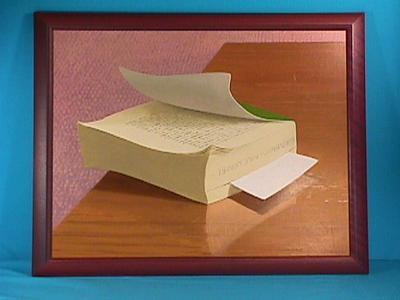 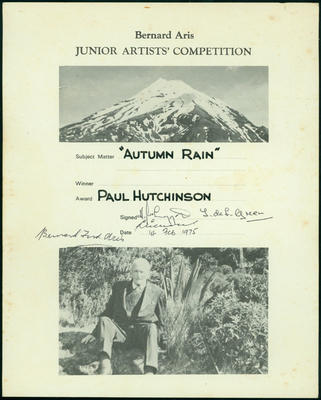 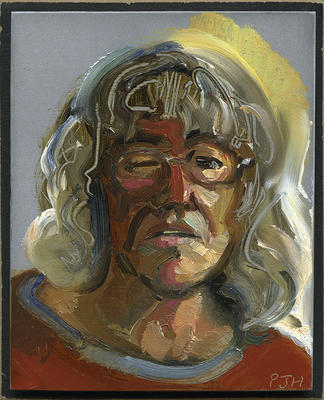 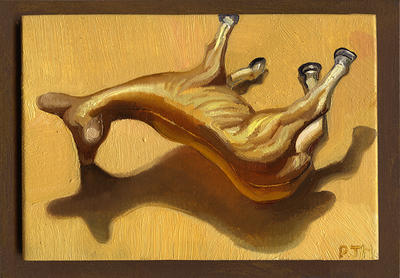