Biography
John McLean was born in Hamilton. Originally he trained as a teacher and worked in various schools from 1963-1970. In 1970 he decided to become a full-time artist. From the years 1976-1986, John worked in various part-time employment while he concentrated on his painting career. From 1986-1993 he taught drawing and painting in the Art and Design programme at Taranaki Polytechnic (now known as the Western Institute of Technology at Taranaki, WITT). After a brief break, he returned to part-time teaching at the Polytechnic from 1997-1998. Since 2000, he has been the chairman of the Te Kupenga Stone Sculpture Society and is a life member of the Society. He was on the policy formation subcommittee of the New Plymouth District Council's Art in Public Places initiative and served as a subcommittee member for the initiative from 2002-2004 once it had been established. He has worked on several films in the construction and paint department and as a sculptor, including 'The Last Samurai' (2002-2003), 'The Lion, The Witch and The Wardrobe' (2004) and 'Prince Caspian' (2007). From 2003-2006 he was a tutor in stone sculpture for WITT community classes. In 2012, he opened an art gallery on his property that showcases his work. John has exhibited extensively in both solo and group exhibitions throughout New Zealand and has exhibited internationally in Japan, New York (USA) and Australia. His work is held in numerous private and public collections.

John believes that the artist's "first responsibility is to discover their own voice." Early in his career he adopted an observational, analytical style. After some years he tired of the approach, saying it became like "cooking to a recipe and producing just another cake". He began to move towards a more intuitive approach that used the unconscious mind as inspiration. Initially this resulted in work inspired by Cubism, before he moved to producing allegorical work.

John says of himself and his practice:
"I live with my wife Chris on our coastal 16 hectare farmlet 40km north of New Plymouth, New Zealand. Here we have self-built our house, studio and workshop and have established a lifestyle around a high degree of self-sufficiency. We have a flourishing vegetable garden and home orchard, some domestic meat production, hunting and fishing. This context gives a firm grounding to my creative life. We also have the delight of 3 adult children and six grandsons.

The total dedication to my art developed after teaching until the age 30. At that time I was fortunate to receive a couple of years of mentoring from Michael Smither, a prominent New Zealand painter. Thereafter I moved into the north Taranaki countryside , which has shaped my vision for over 30 years.

My first 20 years of painting honed skills and vision of the realist genre. After that time I was beset by growing restlessness stemming from growing awareness that I had fulfilled my involvement in the literal domain.

At the same time I had become very interested in Jungian notions regarding the domain of the unconscious at an individual and collective level. Associated with this was an interest in allegory and traditional tales, myth and fairy story, as explored by thinkers such as Joseph Campbell et al. I was drawn to the power of such vehicles in carrying penetrating and enduring statements about our common humanity.

This focus permeated my practice and gave rise to exploratory means that were directed towards engaging more of the unconscious domain in the development of my paintings. This pursuit has lead to the narrative style of imagery with which I work. I like to think that the paintings which result from this can function as visual parable or allegory. While they are open to literal interpretation; there is also an intended level of metaphor and symbolism. The background visual vocabulary I developed in my years of landscape painting has provided an invaluable context from which my paintings can speak, as they attempt to glimpse archetypal dimensions within the human condition.

In addition to my painting practice I also sculpt stone, generally Taranaki andersite. The motifs pursued in this medium generally follow the subjects I pursue with paint." 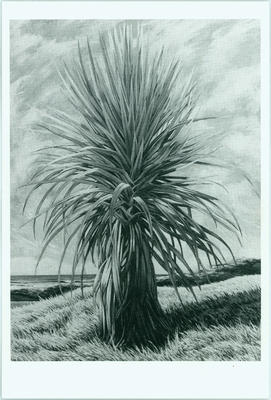 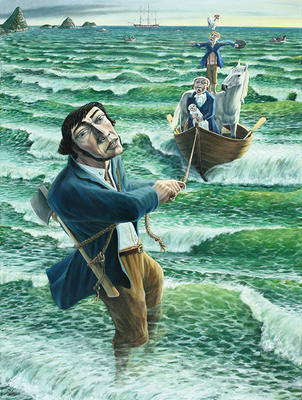 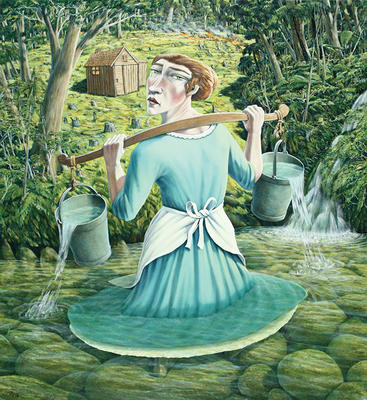 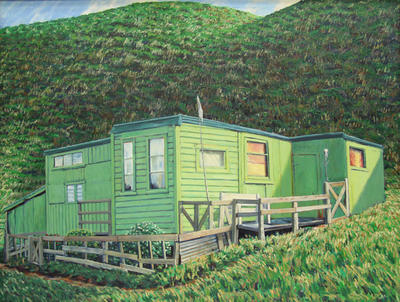