Biography
Vicki Smith is an interdisciplinary artist, educator, digital story teller and community agent who experiments with as many creative tools as she can get her hands on, including UpStage, which she wasinstrumental in creating. Vicki operates between her turangawaewae Harihari, on the West Coast of the South Island, her 11 metre sailing vessel Kiritea and a global arts and education network. With a visual diary as constant companion Vicki’s artistic studies include Photography at Ilam Art School with Lawrence Shustak [1986-7], Ceramics with Chris Weaver and life drawing with Don Pebbles [1988]. Science technical strengths lead to a life at sea as a Fisheries Scientific Observer [1992-1997]. These studies have been interwoven with travel, study and exhibitions of painting, printmaking and photography in Aotearoa/New Zealand, Thailand and London.

A computing course in 1998 began a fascination with communications media, and working and teaching in print and web. Vicki’s co-curatorial work for the UpStage festivals of the last six years is developing part of the diverse art practice that is cyberformance and aligns with her community, education and arts practice. Since 2010 Vicki’s work has been drawn back to her creative speculation of the sea and navigation with shows X [2010], String Games Mahi Whai [2011] and Mean High Water Springs [in WaterWheel, 2012]. She was selected as an artist for the residency SCANZ 2013 in New Plymouth.

Throughout the last decade Vicki has represented her work in gallery talks, education and artsconferences in Aotearoa/New Zealand, overseas and in cyberspace. She is also part of the collaborative team who reworked Learning Communities Online [LCO] handbook [released 2011]. 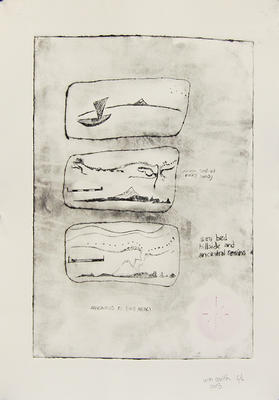