Biography
Herbert Llewellyn Betts was born in 1869, at Brighton, England, and came to New Zealand with his parents at a young age. He was educated at Southbrook, North Canterbury, and in 1884 removed to Okaiawa, Taranaki. He then entered the employment of the Hawera Star, and four years later was appointed accountant, a position which he held for thirteen years. In the year 1901 he went to Stratford, where he had acquired a stationery, bookselling, and fancy goods business in Broadway.He was elected a member of the Stratford Borough Council in April, 1905. Over the years Betts also served as vice-president of the Stratford Tradesmen's Association, and secretary of the Stratford Bowling Club. In 1892 he married a daughter of Mr. W. Sanson, of St. Albans, Christchurch, and had two sons. He died on 17 June 1955. 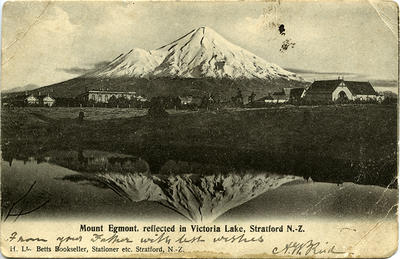