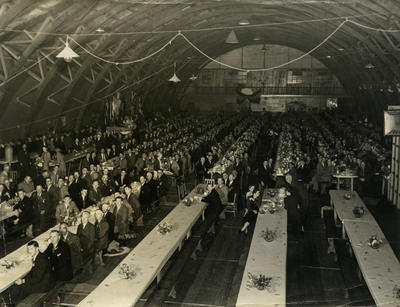 Production date
Circa 1950s-1960s
Description
Photograph of Ann Burgess memorial afternoon tea for returned servicemen, held in the New Plymouth army drill hall, circa 1950s-1960s. Large tables are set up for afternoon tea. Tables in the foreground are largely empty and are decorated with vases of flowers. The tables in the background are full with mostly men dressed in suits. Ann Burgess, M.B.E., was the wife of former New Plymouth Mayor Charles H. Burgess. She was well known for establishing the Women's Patriotic Committee during WWI and the ANZAC Day afternoon teas at the New Plymouth drill hall, which commenced in 1918 and continued under her direction until the organisation of the event was handed over to the New Plymouth Returned Services Association in 1947.
See full details