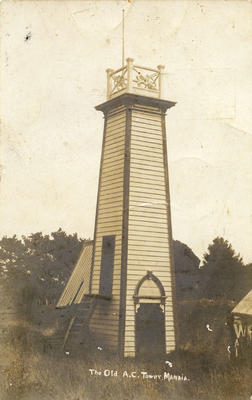 Production date
1880-1912
Description
Photographic postcard of the wooden Armed Constabulary watchtower in Manaia. The watchtower was built in 1880 in conjunction with the Manaia Redoubt that was built on an old pa site, Te Takahe. Built during peacetime, the watchtower and redoubt were built to deal with the growing concern over Maori passive resistence leader, Te Whiti and his followers. The wooden watchtower, which was 35 feet high, was blown down in a storm and replaced in 1912 with a concrete tower that stands today amidst an 18 hole golf course. Two of the original blockhouses from the redoubt remain on the same site.
See full details