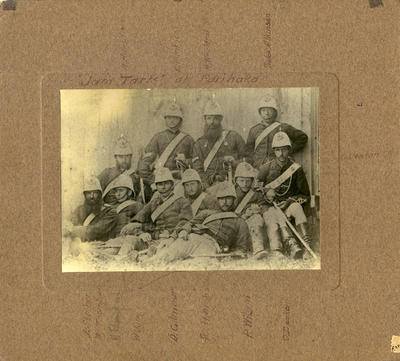 Production date
1881
Description
Photograph of a group of soldiers nicknamed the "Jam Tarts" at Parihaka. The soldiers are grouped together with some sitting on a bench in the back row and others lying casually on the ground in front. Photograph has been adhered to a large, brown card.

The nickname “Jam Tarts” could simply have been a reference to the soldiers’ red uniforms, but it was also a common slang term in 19th century New Zealand for upper class or wealthy people.
See full details

Probably Henry Newland one of three Newland brothers to fight in the Taranaki land wars. Harry Newland, my father, was born in 1926.