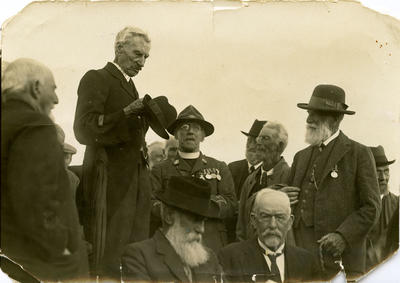 Unveiling a memorial at Ohawe to commemorate the anniversary of the battle of Otapawa pa.

Production date
1926
Description
Photograph of a group of men, some soldiers, at an memorial unveiling ceremony. Two men stand on the left side of the image, both without hats. Another stands on the right side of the image with his hat on. In the centre of the photograph stands a decorated soldier wearing a hat. Sergeant Major Bezar, who might be the man holding his hat, was the sole survivor of the Otapawa pa battle of 1866.
See full details

Unveiling a memorial at Ohawe to commemorate the anniversary of the battle of Otapawa pa.