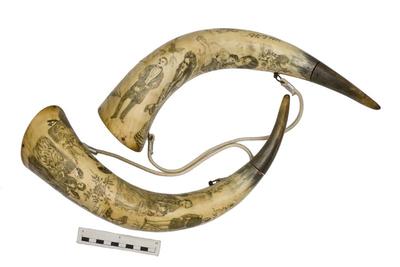 Production date
1870s
Description
A pair of scrimshaw powder horns ornately decorated with a variety of scenes. One of the horns features a royal crest, a woman tending to a child and a woman with long hair and flowing clothes wearing flowers in her hair. The other side of the horn features a woman wearing a hat and a scene where a man is attacking a woman and child with a sword. The other horn features a family group dressed formally, a cherubic figure and a mother and child reading. Another side features a man in military dress holding hands with a woman, a military figure fording a river on a horse and two couples dressed very formally for a ball. " Waikato Kamara " is written below the figure of the horse and the man. The horn also features a naked women and a woman curtsying while holding a fan. Both horns also feature various pieces of floral ornamentation. On the scene with the two formal couples small indents used during the scrimshaw work are visible indicating the scene was finally drawn in a slightly different place than originally planned.
The horns have wooden plugs nailed into the base and each horn has two metal swivels and loops screwed into it. A relatively modern white cord has been attached to the loops on both cords. The tip of each horn can be removed and a brown wooden plug has been attached to each tip to allow it to be stuck into the main body.
See full details

Credit line
These scrimshaw powder horns hint at a friendship between a worn out jailer and an inmate in New Plymouth’s prison.
The pair of bullock horns, which have been converted into powder flasks and painstakingly decorated with a variety of scenes, were given to retired soldier James Riley in the 1870s when he was working at the newly opened prison.
Riley was discharged from the 65th Regiment in 1866 with an army record which stated he was “quite worn out” and “sick”. He eventually settled in Fillis Street and, according to family history, he found work at the prison. It was during this time he received these horns from a prisoner. Whoever crafted them obviously had plenty of time as they are heavily decorated with ballroom scenes and other pictures apparently from classical myths. Scrimshaw is a time consuming art which involves smoothing the surface to be decorated before cutting it with a sharp tool. Illustrations from books can be traced by pricking the outline of the picture with a pin and then joining up the dots. After the patterns are finished they are rubbed over with something like soot or ink to mark them and polished to remove excess colour.