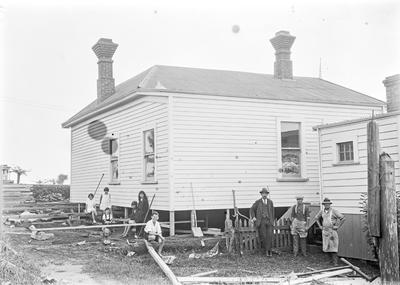 Production date
1928-1930
Description
This photograph of the exterior of a house, initially believed to be located in Whangamomona, shows three men posing with six children seated and standing on the new building work. The name 'Vince Bond' is written on the inside of one of the windows of the house. This image has been identified as the house of the Hodder family on Gill Street, New Plymouth and the man in the suit as Edward (Ted) Walter Hodder. The older boy is Ted's son, Alfred (Fred) Walter Groves Hodder. The girl with long hair is Ted's daughter, Adeline Gertrude Hodder. The small boy is Edward Donald (Don) Hodder. One of the two older girls is Dorothy Marie Hodder. When the house was later sold for removal, it was found that the roof was not strong enough to be transported so it was demolished. There is a motel on the site now.
See full details

If this is the Hodder house it would be in New Plymouth not Whangamomona. The man in the suit is Edward (Ted) Walter Hodder and the two other men are his workers. Ted's 4 children are in the photo too. The older boy in the light coloured shirt is Ted's son Alfred (Fred) Walter Groves Hodder. The girl with the long hair leaning against the house is Ted's daughter Adeline Gertrude Hodder. The small boy with the braces on his trousers is Ted's son edward Donald (Don) Hodder. One of the other girls is his daughter Dorothy Marie Hodder - either the girl seated next to Adeline or the taller of the two girls dressed in light coloured dresses. Ted built a house in Gill Street New Plymouth - there is a huge motel on the site now. when the house was sold for removal it was found that the roof was built with short pieces of timber and not strong enough to hold the house together if transported away. Was then demolished.