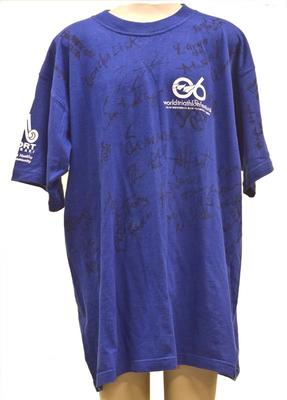 Production date
2006
Description
A blue cotton Marshal's T-Shirt for the New Plymouth World Triathlon Festival held in November 2006. " 06 / worldtriathlonfestival / 10-12 NOVEMBER NEW PLYMOUTH 2006 " is screenprinted in white on the right facing side of the chest. Three fern leaves are incorporated into this logo. " SPORT / TARANAKI / Inspiring a Healthy / Active Community " is screenprinted on white underneath the stylised mountain emblem of Sport Taranaki. " Race / Marshal " is screenprinted in white on the back of the shirt. An image of Len Lye's Wind Wand is incorporated into this text. Competitors signatures are written in black marker pen on both the front and the back of the T-Shirt. " PACIFIC / WEAR / L " is written on a multi-coloured manufacuter's label on the inside of the collar along with care instructions which are written on the reverse.
See full details