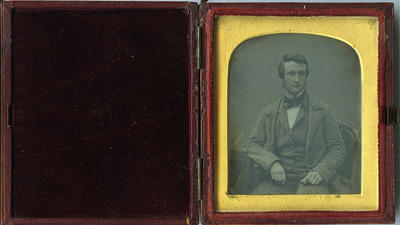 Production date
Circa 1851-1867
Description
Daguerreotype of an unknown man taken by Antoine François Jean Claudet, student of Louis Jacques Mandé Daguerre and one of the first daguerreotypists working in Britain. The unknown man is seated and has one arm resting on a table next to him. He is wearing a suit with a scarf tied in a bow around his neck. He is not looking directly at the camera. The daguerreotype is framed by a plain gold metal matt and is covered with glass. The daguerreotype is contained in a red/brown leather case embossed with the British coat of arms and Claudet's studio details. The embossing reads: "Mr Claudet / 107 Regent St Quadrant". The inside of the case is lined with maroon velvet. The case has double metal hinges on the left hand side and a press-in clasp on the right. Claudet was appointed "Photographer-in-ordinary" to Queen Victoria in 1853.
See full details