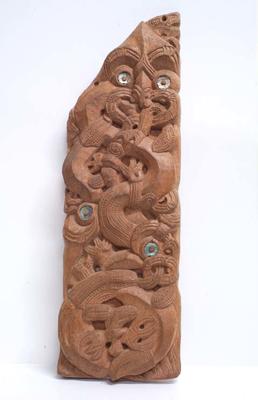 Production date
1978
Description
Replication of A77.330. Consists of a mass of serpentine bodies with one large full face at the top and two smaller heads, both in side profile, near the centre of the epa. One of these heads is upside down and has a very pointed forehead. The other head which is in side profile appears to have no forehead. The body of the main female figure joins the head at the left side. The forehead of this main figure is very pointed. One arm passes through the lower jaw while the other passes under the lower body with the hand resting on the chest near the lower one. The leg passes through the eyebrow of the lower figure. The figure which is upside down has its arms around the arm of the main figure and its leg around the main figures neck. The other figure links arms with another body which has no head. No leg is shown but there is a leg on the headless body with the foot resting on the forehead of the inverted figure. Decoration occurs on the lower part of the figures bodies (pakati and haehae). Notching is used around the mouths. Puwerewere is found on the brows and lips of the figures. There is very little background decoration but where it does occur it is matakupenga. Two lashing holes are present along the top of the epa with two on the left side and two on the right side. Paua shell with notches are all fitted into figure's eye's. The epa would fit on the left side of a pataka. Timber has not been stained. Inscription carved on verso face " Carved by D R Jonas 1978 N.P". White sticker that reads $80 also still adhered to back face.
See full details