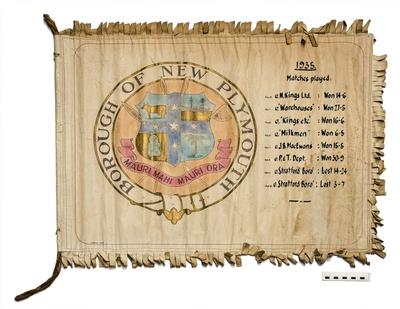 Credit line
Social sports results can quickly fade from memory but this handmade banner shows one group of weekend warriors didn’t want to forget their 1935 season. But the story behind it remains frustratingly vague.
While the creator of the banner, L G Westwood, thought to record their name in one corner they left out some other crucial facts. The sport played is not mentioned (although the scores indicate it could well be rugby) and their own team is not named. However, it does seem reasonable that they came from the New Plymouth Borough Council since the borough crest features so prominently and the banner was found recently in a New Plymouth District Council storage area.
The banner, which has been sewn together using two old maps and a length of rope, records wins against prominent local firms including “Newton Kings” and “J B MacEwans”, but the season fizzles out with two losses to a team from Stratford Borough.