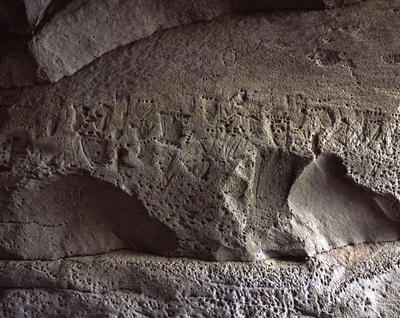 Production date
21 Aug 2005
Description
The petroglyphs at Gibbs' Beach. Distinct markings on the sandstone rock face are visible in a frieze across the centre of the image. During a winter storm in 2007, wave action carved away part of the wall of the cave, including the petroglyphs. The markings are now destroyed. The majority of the markings were of human footprints, possibly representing the fact that that area of coast was used as a thoroughfare by Taranaki and Waikato tribes. The largest of the feet were over a foot in length, the smallest about four inches. The number of toes ranged mainly from four to six. Though it is not known who carved the petroglyphs, one theory is that it could have been Te Rauparaha as he journeyed south, who was reputed to possess six toes. On the west wall of the cave there was also two representations of the human figure (see L W Delph, 'Cave Drawings Near Tongaporutu, Taranaki' in 'The Journal of the Polynesian Society', vol 48, 1939, pp. 116-121). Photograph taken 21 August 2005.
See full details 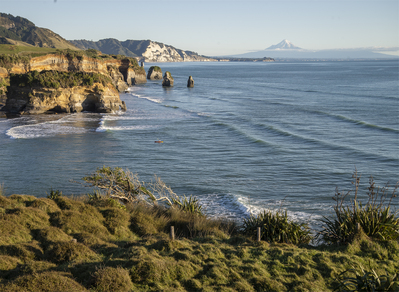