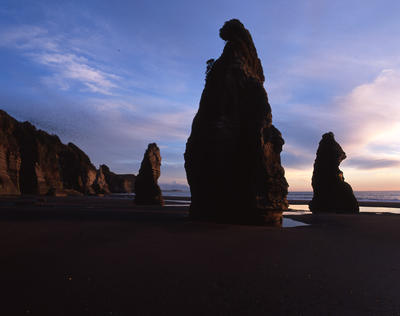 Production date
13 Aug 2003
Description
The Four Brothers at dusk, taken from Four Brothers Beach. Above the cliffs on the left hand side of the image is a flock of starlings, which roost on the rock stacks at night. The light is low and the three visible stacks are silhouetted against the sky. There is high cloud and Mount Taranaki is visible in the background. The Brother to the left (closest to the cliff face) collapsed after the storm of 29 September 2003. Pat Greenfield believes this is because the stacks closest to the shore are susceptible to the turbulence of the wave wash zone. Photograph taken 13 August 2003.
See full details