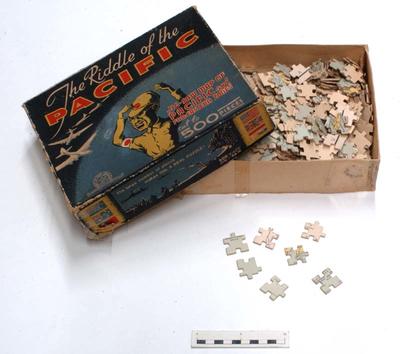 Production date
Circa 1943
Description
A 500 piece jigsaw puzzle titled The Riddle of the Pacific. The puzzle is held in a cardboard box with a lift-off lid and comes complete with a map of the Pacific Ocean and Far Eastern Zone. The lid of the box features a caricature of a Japanese soldier and a group of five planes. " The Riddle of the / PACIFIC / JIG-SAW MAP OF / PACIFIC and / FAR EASTERN ZONES / cut to / 500 PIECES " is written on the top of the lid. " JW Ld / MADE IN NEW ZEALAND / STANDARD SERIES (REGD) " is written on a manufacturers mark on the bottom left facing corner of the lid. The sides of the lid feature a series of six flags and a military beach landing. " The large number of pieces / makes this A REAL PUZZLE! " is written in white on both sides. Both ends are yellow. " This box contains:/1 full-size map of The Far East and the Pacific War Zones, and / 1 similar map cut into 500 pieces of provokingly similar shapes " is written in red on the ends. The box also contains a military map of the Pacific Ocean and Far Eastern Zone which is featured on the jigsaw.
See full details