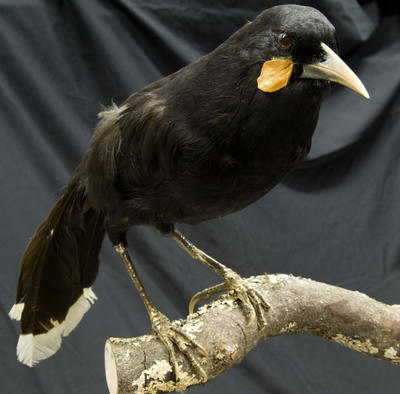 Description
A male huia (Heteralocha acutirostris) specimen mounted on a piece of wood together with a female specimen. It has a short stout bill and a wattle which has been painted orange.
See full details

Credit line
" The huia was prized by people – too much for its own good. For Maori, huia feathers were the mark of high status. You could wear huia feathers in your hair, or whole skins in your ear, only if you were of chiefly rank. The huia’s name became associated with treasured things: containers for precious items were called waka huia.Europeans coming to New Zealand were also captivated by the huia’s beauty and its unusual features. Most notable of these was the difference between male and female in the size and shape of the bill. The first European to give a scientific description of the huia thought that male and female were two different species. The huia became a target for collectors – to be stuffed and mounted as decoration in wealthy homes. It also came to be prized for modern fashion accessories – for a while, hats trimmed with huia feathers were all the rage." Extract of text originally published in Tai Awatea, Te Papa's onfloor multimedia database (1998). See: http://collections.tepapa.govt.nz/theme.aspx?irn=1339