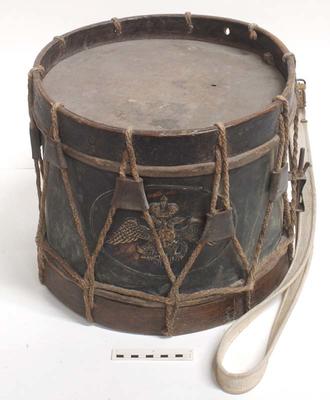 Description
A Russian side drum with a copper sheath and skin membrane with cording on sides. A double headed eagle crest features on the side.
See full details

Credit line
This drum was part of a collection of assorted militaria collected by Edward Frederick Hemingway during his service with the British Army. Hemingway served in various theatres of war including the Crimea and New Zealand. It is said to have been taken from the body of a Russian drummer boy during the Battle of Tchernaya on 16 August 1855. For more information see Scavenging and Skullduggery: The Hemingway Collection in Moffat, A. Flashback: Tales and Treasures of Taranaki. Wellington, Huia, 2012, pp.27-32 . http://www.pukeariki.com/Heritage/Flashback.aspx