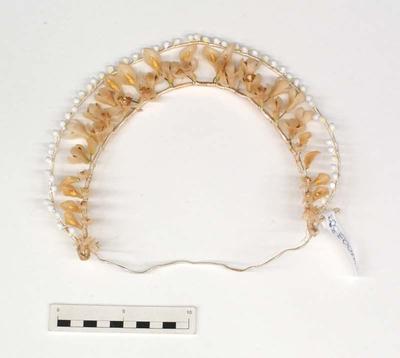 Description
A wedding headdress with pieces of artificial white and cream-coloured flowers lining the edges of a wire frame. It is shaped like a headband and has elastic at the bottom for placing it around the head.
See full details

Credit line
At the beginning of World War Two, Madge Cowperthwaite advertised on the radio for a farming family who would take her in for a holiday. The answer was to change her life. She travelled from Auckland to stay on the Peters farm in Taranaki. Their eldest son, Les, had recently left for Europe and his brother Alick had just returned home from Wellington to take over helping out on the farm. At the end of her holiday, Madge and Alick began writing to each other. They were engaged by November 1940 and married in May 1941 – only one week before Alick too left for the war and didn’t return for four and a half years. Throughout that time the letters between them continued to flow. They enclosed a single piece of ribbon, dated with each letter sent and creating a record of the words that bound them together.

Because they married during the war, materials and accessories were scarce. Madge had her dress and all these accessories made for her. She borrowed her veil and the handkerchiefs and ditty bag were made by friends. The paper bells were decorations used at the reception.

After the war the young couple settled in Auckland until 1955 when they returned to Taranaki to farm on Kent Road.