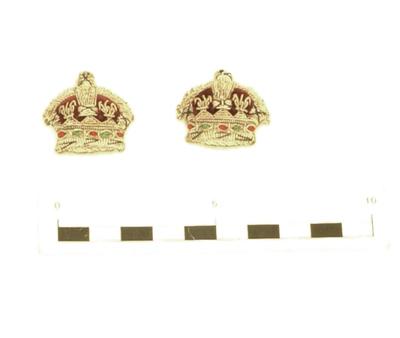 Description
Two crown badges that are military insignia probably for a coat. The crowns are made of velvet and a metallic thread outline.
See full details

Credit line
These badges belonged to Major Robert Saxton Matthews, an Inglewood resident who was prominent in the military, serving in the Hawera Mounted Rifles, the South African War, the New Zealand Staff Corps and as an Assistant Quartermaster General. He retired in the 1920s and when he died in 1931 a Taranaki Herald obituary noted that "his kindly, courteous, and interesting personality will be greatly missed from this district where he has been held for many years in the very highest esteem."