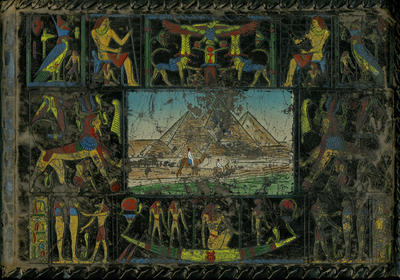 Production date
1939-1945
Description
Album of WWII photographs. Includes imagery of allied and axis troops, and campaigns in North Africa (Egypt and Libya). Also images of military figures including Winston Churchill and General Rommel. In the second half of the album is a series of photographs of general scenes of Egypt, probably produced for trade, likely to have been collected by the compiler of the album. Bound with soft leather cover inscribed with coloured Egyptian scenes. On page 8 of the album, behind the top left corner photograph, is a folded letter slipped behind the photograph. Dated 1942, it reads:

I submit this recommendation for A/CPL T H Lundie (?) to be awarded the military medal for outstanding bravery. This NCO courageously, without fear for his own life, crawled out from our position for 100 yards approx to where I was lying badly wounded, while under heavy German tank fire, outside El Alamein. This NCO, with great tenacity [d]ragged me back to our position, after red X attention I was rushed to hospital. This NCO is a credit to his regiment. He has saved my life, and deserves due recognition. I have handed him my own M M [military medal], which I was awareded when I was an NCO. Hoping this meets with your approval.

This letter may indicate the owner of the album was either the man wounded or the man recommended for a medal.
See full details