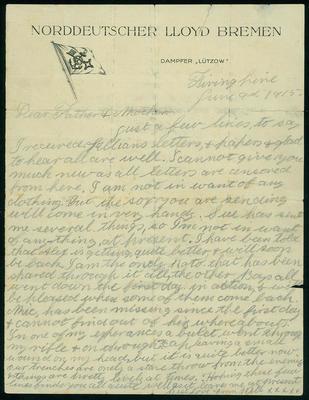 Description
Corporal William David Kemp, was born at Normanby, Hawera, Taranaki. The eldest son of David and Alice Kemp of Rotorangi, he farmed with his father at Roto-o-rangi, Cambridge up to the date of his departure for Trentham.
He was one of the first to volunteer with the main expeditionary force, and was with the first New Zealand landing forces at the Dardanelles, where he fought for nearly four months.
Slightly wounded once, having the rifle shatter in his hand, the bullet passing through his cap and grazing his head, he was killed in action on the 13 August 1915 at the Dardanelles aged 22 years.
A collection of personal papers including a diary recording active service at Gallipoli, beginning 25 January and ending 12 August 1915, the day before he was killed.
Full transcript of diary available.
See full details

Soldier's pay book for use in Active Service belonging to W.D. Kemp.

Diary. Records active service 25 January to 12 August 1915, the day before he was killed.

Letter with envelope. From William Kemp to his parents dated 9 June 1915. (Transcript available)

Two memorial cards for W.D. Kemp. His death notice, obituary, roll of honour and 'In memorium' clippings, all inside a New Zealand Expeditionary Force memorial 'Their Name Liveth for Ever'.

A card sent by Kemp to his sister Gwen.

A card sent by Kemp (while serving overseas) to his parents.

Copy of letter from Anne Smith to Gywn Meredith re the family tree. 24 April 1965

Remembered for his service by his family.