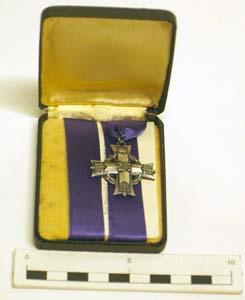 Description
A New Zealand Memorial Cross medal with a thin mauve coloured ribbon attached. The medal is in the shape of a four pronged cross with a wreath design between the arms. A stem with seven leaves protrudes from the end of three arms of the cross. A crown sits atop one arm of the cross. The ribbon is wrapped around a felt covered backing. "GR VI" features at the centre. "21758 CPL A.M EAGLES" is engraved on the reverse of the medal. A cardboard rectangle is tucked behind the ribbon. "This Memorial Cross is forwarded to you/ by the Prime Minister on behalf of the/Government and people of New Zealand/ in memory of one who died in the service/of his country" is written on the cardboard. The medal is boxed inside a small black case with a hinged lid and a crown on the top.
See full details