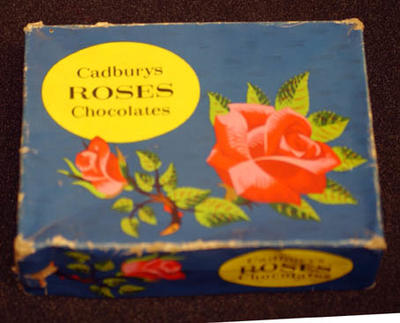 Production date
Circa 1960s
Description
A paper covered cardboard Cadbury Roses chocolate box.
The box is covered with white paper and has a removable lid covered in blue with blue paper. The lid also features pictures of roses on a vine. " Cadburys / ROSES / Chocolates " is written in black in a yellow oval on top of the lid. " 1lb / net / INCLUDING / WRAPPINGS " is written on one end of the lid. " THIS BOX / OF CHOCOLATES / CARRIES THE / CADBURY / GUARANTEE / OF QUALITY " is written on the other end of the lid. Taranaki's 1965 Ranfurly Shield record of is written in green pen on the inside of the lid.
See full details

Credit line
The end of a proud Taranaki rugby Ranfurly Shield era has been captured in this chocolate box.
The box was used to hold a collection of supporters' badges which were gathered by the Donnelly family during the 1965 season when the Taranaki team, which included Neil Wolfe and Ross Brown, saw off five challenges before going down fighting to Auckland 11-16.Judy Jones (nee Donnelly) remembers her family went to every Shield game during the season and made great efforts to swap badges with visiting supporters. Sometimes they would even scavenge discarded badges from the ground. The family made a point of sitting in the south eastern corner and normally feasted on home-made bacon and egg pie while surrounded by families who also sat in the same spots every week. While many supporters would have been sad to see the Shield head north, the Taranaki coach J.J Stewart noted that it could sometimes be a mixed blessing.
"Families tend to spend their money going to the football and where they might have had a roast they make do with mince instead…For a province like Taranaki six matches is long enough to hold it," he said. For more information on the Taranaki Rugby Team and Ferdie, their famous mascot see Bulls on Parade: Ferdinand the Bull and Taranaki Rugby in Moffat, A. Flashback: Tales and Treasures of Taranaki. Wellington, Huia, 2012, pp.61-63. http://www.huia.co.nz/shop&item_id=3428