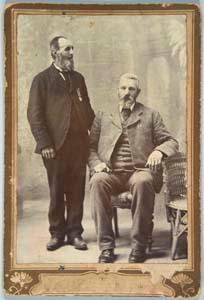 Description
Studio portrait of Lieutenant William Johnson (standing) and John Elliot (seated) in front of painted backdrop. Both are decorated with the New Zealand War Medal (John Elliot wears bar only) and Lieutenant William Johnson has a patch over his left eye. John Elliot (1843-1902) was a teenager when the Taranaki Wars broke out but was allowed to join the mounted volunteers and took part in the attack on Te Kohia pā and the Battle of Waireka in March 1860. He served on the Provincial Council until it was abolished in 1877 then was elected chairman of the Taranaki County Council from 1879 to 1887.
See full details