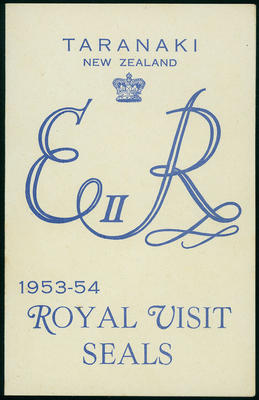 Production date
1954
Description
A collection of memorabilia related to the visit to New Plymouth on 8-9 January 1954 of Her Majesty Queen Elizabeth and Prince Phillip.
See full details

1. A programme and tour itinerary for the visit of Her Majesty Queen Elizabeth II to New Plymouth 8 - 9 January 1954.

3. Photograph. Queen Elizabeth and Prince Phillip on the balcony of the Criterion Hotel New Plymouth 1954.

4. A small paper New Zealand flag, which was apparently stapled to a short stick. The history of the flag is not known, however it is similar to those waved by school children during royal visits 1950s-1960s

5. Taranaki New Zealand. 1953-54 Royal visit seals. Issued by the New Plymouth Junior Chamber of Commerce to commemorate the visit on 8th and 9th January 1954 of H.M. Queen Elizabeth II and H.R.H. The Duke of Edinburgh, to the province of Taranaki, New Zealand.