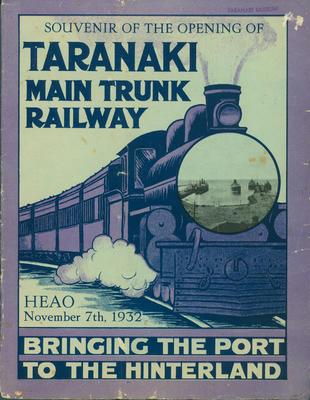 Description
A collection of items relating to the development and opening of the Taranaki Main Trunk Railway in 1932. Includes information on The Northern Railways League (1892) and the Western Taranaki Railway Commission (1912) as well as an 1884 map showing the line between Marton and Stratford. Also includes newspaper clippings relating to various developments on the railways throughout Taranaki.
See full details

2. Supplement to the Taranaki Herald. August 1884. Notes on two alternative routes for the Northern Trunk Line of Railway.

Newspaper clipping. 'A one-man campaign for a coastal railway' 18 April 1959.

Newspaper clipping. 'A photograph of the New Plymouth railway yards last century was one of the unusual things brought back to the city by Mayor David Lean after he attended the Armada 400 celebrations in Plymouth, England...' Taranaki Herald, 19 August 1988.