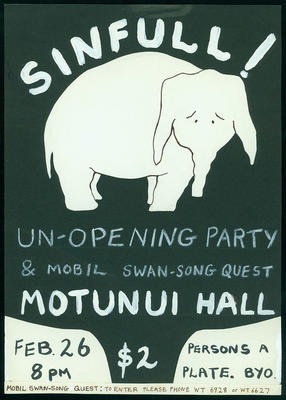 9.Songsheet. Motunui on the main pipeline. Written by Ben Gray with apologies to Peter Cape.

15. Songsheet. We're the residents of Motunui. Performed at the No Mobil Song Quest 1981

16. Invitations to the Moth Ball. 8 Aug. 1987. Newspaper clipping. Synfuel takes a breather. Taranaki Herald 4 Aug. 1987 and introduction to and script for The return of Deidre Boot. August 1987.

17.Words to the song Haere Ra Taniwha. Sung by Julie Lambie at the Sinfull Un-opening.