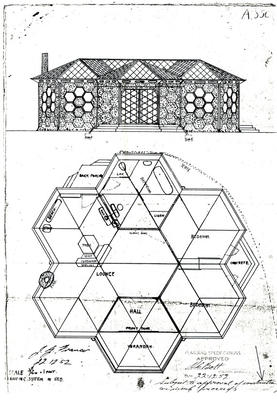 Production date
1926-1978
Description
Born in 1905, Roy Brewster was known locally as the Bee man.
He began keeping bees at the age of 19, an interest which was to develop over the years; he went on the build a hexagonal house, Norian, in Sanders Ave, known to many as the Beehive House. Brewster believed right angles were alien to harmonious living and worked to eliminate them from his lifestyle.
A fascination with flight and the theories of aerodynamics inspired Brewster to develop drawings and build models of aircraft. He died in March 1978.
The collection consists of correspondence, research notes, drawings, photographs of his aircraft, hexagonal house and his philosophies.
See full details

Folder 2. Lecture notes and essay for thesis(?) Attributed to B Kernot, Dept Anthrop. University of Auckland 1960.

Folder 3. Aerodynamics "About the Aerodynamic Forces of an Aeroplane" (Brewster: undated)

Folder 7. The essential Principles of construction that a fully efficient aeroplane must incorporate. Typescript (Brewster undated)

Folder 8. Flight Clippings from magazines and newspapers, some undated.

Folder 9. Clippings from magazines and newspapers, some undated.

Magazine articles. All magazines noted below are extracts or clippings of aviation magazines, documenting technology and experimentation. Some have been marked as special interest by Brewster.

Folder 44. Thesis. Theory of Flight, June 1937, miscellaneous papers and notes most probably used in the 1937 thesis.

Folder 52. Correspondence. Aviation Development Ltd. Nov 1938 - Sept 1941. The firm through which Brewster had to negotiate the British patent. The letters relate to his ''bird model' and includes a reference from W. J. Cleland of New Plymouth who confirms the success of Brewster's invention.

Folder 54. Correspondence. Boeing Aircraft Corporation. 1959-1977. Includes correspondence (1959) regarding aerodynamics, Brewster's early letters give an insight into how and when his interest in aviation began. In 1966, Brewster writes regarding aircraft stalling in mid flight. These letters are interspersed with 'Norian' philosophies. Ten years later, Brewster renews communication with Boeing. Again his letter relates to philosophy rather than aeronautics.

Folder 56. Correspondence. Dept. of Aeronautics (London) 1939. A copy of a letter to Dr N. A. V. Piercy re the theory of flight. Also see Folder 52 Aviation Devlopment Ltd. which contains correspondence referring to Piercy's possible use of Brewster's concepts. Includes photocopies.

Folder 60. Correspondence with McMillan & Fredic Ltd., Stratford 1940. Re the Scott Squirrel engine and other aviation parts from the firm's "flying flea". Items loaned to Brewster for construction of a 'slow landing' speed aeroplane. Includes original agreement and correspondence.

Folder 61. Correspondence. Military Service. Called up for service Sept 1942. Brewster requests to serve in the airforce rather than the army.

Folder 62. Correspondence. 1940 - 1975. Includes a copy of a letter to Professor Leach, Auckland University outlining Brewster's development of his ideas and theories. 194? ; Letter from Taranaki Aviation, Transport and Technology Museum (TATTM) re a Gypsy Major engine. 1975 ; Letter to TATTM re the history of the Flying Flea from Ian McMillan. 1979 ; copy of newspaper obituary for Brewster, 29 March 1978.(acq. 04 Mar 1996)

Folder 65. Correspondence. Charles Turner. 1940-41: a statement by Turner introducing himself (Oct 1940). Turner claims to work for the British Government and offers to help Brewster. However there are misunderstandings. Turner is convinced there is a plot and Government agencies are 'obstructionists'. Turner offers to send Brewster to UK with his plane. However this never eventuates. Includes photocopies.

Folder 66. Finance. Inland Revenue presented Brewster with a tax assessment. In return, he furnishes facts and figures relating to his financial, business and family circumstances. 1943 - 53

Folder 76. Miscellaneous clippings and extracts on a wide range of topics.

Folder 79. Philosophy. Norian Thoughts 1. A compilation of notes and theories developed during the 1960 and early 1970's. Has been kept in original order as when deposited in the taranaki Museum. Discusses forms of Truth and Energy. Discusses Revelations 14:6 - 8. Many undated notes.

Folder 80. Norian Thoughts 2. Items found in other parts of the collection.

Folder 81. Norian Thoughts 3. One of a limited edition. Written on the reverse of a honey advert/flyer. Has a hand made envelope addressed to the Postmaster General, Wellington. Dated 9/9/1960. Annotated as the author's copy.

Plans. A number of house plans.

Book. Hexagon House. Outsized mock up for the booklet

Print. Profile of E. R. Brewster (lino print?). Print bears Brewster's head inside a hexagon, inside a circle. (the paper is foxed).