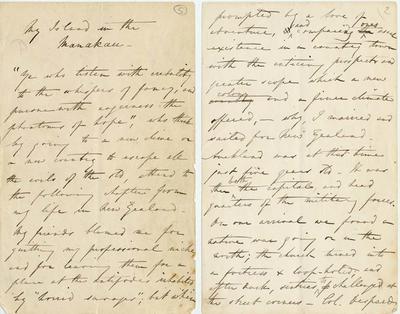 Production date
1833-1857
1800-1839
1840-1849
1850-1859
Description
Henry Weekes was appointed by the Plymouth Company of New Zealand as a surgeon in the settlement of New Plymouth. He travelled to New Plymouth on the 'William Bryan' in 1841, but stayed only a short time. He returned to New Zealand in 1845 for four years.
The papers include his diary, 1833-1840, covering the period of his study to become a surgeon; three family letters; papers relating to his purchase of land in New Plymouth; an authorised copy of the certificate of his marriage to Sarah Quartly, 1845; an account of his life on Puketutu entitled "My island in the Manukau", 1845-1849; documents relating to his travels in France and Chile; a diary of his voyage to New Zealand in the ship 'Kenilworth' in 1857; family trees for the Weekes, Coleridge and Bowden families; and booklets on the Weekes family and Puketutu Island.
See full details

5. My Island in the Manakau. by Weekes (mss)

29. Photo album with images of various places in NZ. Including the Old House on Weekes' Island and a trip to Rotorua. C1907

31. Richard Weekes, Gentleman at Arms and Prisoner in the Fleet. [Reprinted from an article by Ethel Lega-Weekes included in the Rev S Baring-Gould's Book of 'Devonshire Characters and Strange Events 1908].

32. Some Reminiscences of the Wykes of South Tawton and a few remarks upkn their residences by Rev W. H. Thorton M.A.. Reprinted from the Transactions of the Devonshire Association for the Advancement of Science. Literature and Art 1897

34. An Account of the Parish Church of St Andrews South Tawton, Devon and the Chapel of St Mary, South Zeal. by Charles. K. Burton M.A with an acknowledgement to Miss Ethel Lega-Weekes,. 1956

35. Puketutu Island in the Manukau, a brief comment, Historical and Legendary 1950

36. Newspaper "The New Zealander" Vol 4, No 311, published Auckland Wednesday May 23 1849. This newspaper advertises the sale of the Estate of Quartly Grange near Auckland, as Dr Weekes is about to return to England

37. Original contents list compiled by the NP Library at time of deposit