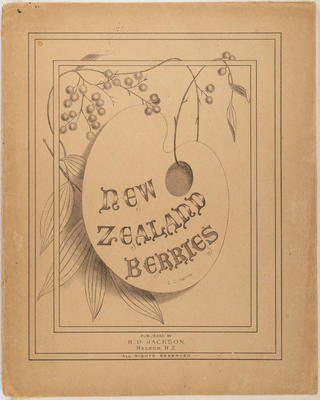 Folder 6. Typescript. Left for New Zealand November 19th 1840. Written by Sarah Harris, it describes the voyage and the first years at New Plymouth; Typescript. Letter from Sarah Harris (page one missing); Typescript. Notes on the Moore Family, abstracted from a volume "Chronicle of the Crompton-Smith Family of New Zealand'.(Original Chronicle held at the Alexander Turnbull Library Ref: 88-362)

Folder 4. Letter to Edwin Harris from his sister Ellen Harris 1842; Letter to Father and Sisters, from Sarah Harris. 20 April 1841 ; Letter to Edwin from Angus Dobson, Plymouth. 28 April 1844 ; Bill of lading for one case of private effects, on board the ship Arabella for Mr W. A. Moore. 1881

Music book. Fifty songs for the voice and guitar.

Music book. Chappell's instruction book for the guitar by G. Luigi. On inside cover 'This book belongs to Edwin Harris lent by E. G. Hobbs