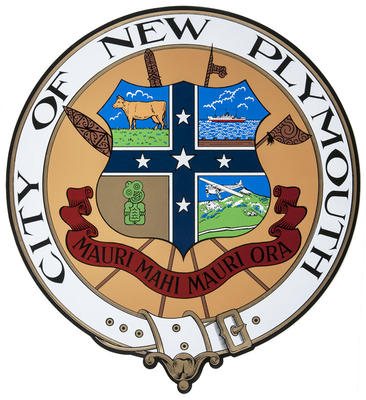 Production date
1941-1989
Description
The Coat of Arms for the New Plymouth City Council 1941-1989. This is mounted onto an adhesive backing which is still intact.

The crest was first suggested in 1898 by Mr W. F. Gordon, designer of the illuminations on Government buildings in New Plymouth for Queen Victoria's diamond jubilee the previous year. He drafted a design Showing the Southern Cross (stars), a milch cow, the breakwater with shipping, a tree fern and a greenstone tiki. Mr Freeth, clerk of the court and an ardent Maori scholar, suggested a motto in Maori which means, 'The industrious heart lives, or survives; the indolent heart dies, or goes under.' The council shortened that to 'Mauri mahi mauri ora' ('The Industrious Heart Lives').

In June, 1941, the New Plymouth Borough Council decided to make changes to its civic crest. The steam auxiliary ship in the top right quarter of the emblem was to become 'a proud merchant vessel equipped with radio', while a tree fern was to be replaced with an airport scene showing Mount Egmont and the famous monoplane, the Southern Cross. The design used from 1941 until 1989 thus showed the following:
The Maori weapons shown behind the shield are:
Top right: A Ko-a digging implement sometimes used as a Weapon of war.
Lower right: A Tewhatemha - a weapon of war with quillets of split feathers attached.
Top left: A Taiaha - a weapon oi- staff of rank. Orators carry this 'taiaha' while addressing their people.
Lower left: A Hoe - a paddle.
Top right quarter: A berthed merchant vessel depicting the development of the port and importance of commerce.
Bottom right quarter: New Plymouth airport and the monoplane Southern Cross. This marks the importance of commercial aviation and associates the area with the pioneer trans - Tasman flights by Sir Charles Kingsford-Smith and Charles Ulm.
Top left quarter: A Jersey cow, representative of the dairying interests in the Taranaki province.
Bottom left quarter: A Heitiki - the Maori ornament. Hei translates as being a neck ornament and tiki is the form of man.
See full details