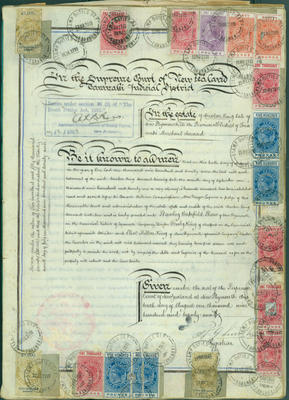 Production date
1927
1920-1929
Description
Newton King, son of Mary (nee Chilman) and Thomas King, was born in New Plymouth 1855. In 1881, Newton opened his own auctioneering business and over the years became a well known enterpreneur. In 1920, he floated his business Newton King Ltd, which was to have a lasting impact on rural Taranaki. He had a passion for farm development and promoted mechanisation.
Over the years, King massed considerable property including Nukahakare and Puketiti Stations, Brooklands, the Gables etc. He died at Brooklands in 1927.
The last will and testament of Newton King of New Plymouth. Parchment sheets have been stitched together to form a book and include Estate Duty Assessments from the Commonwealth of Australia which have been pasted into the inside back cover. This is an ornate document written on parchment and decorated with death duty stamps and cancelations
Also the original envelope.
See full details

Last will and testament and envelope.