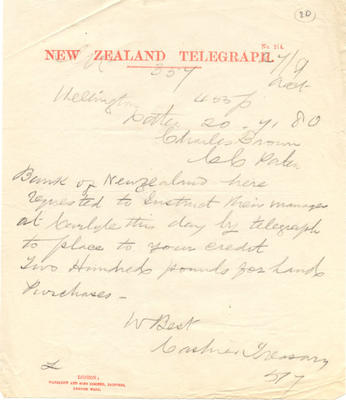 Production date
1855-1880
1850-1859
1860-1869
1870-1879
1880-1889
Description
The collection consists of a variety of papers including transfers of land ownership in the Borough of New Plymouth. The land in question (between Bell and Wakefield Streets) passed from Maori ownership to Chas Brown and later to the Crown.
See full details

1. Appointment of Charles Brown as Captain in the New Plymouth Battalion of Militia. 29 Oct. 1855. Parchment

2. Command from Colonel Thomas Gore Brown to Charles Brown, directing him to raise a militia from four hundred of the inhabitants of New Plymouth. 29 Oct. 1855. Parchment

7. Letter of appointment to the position of Civil Commissioner of Taranaki. 23 July 1875

19.-22. Telegram. New Zealand Telegraph. From Treasury to Civil Commissioner re payment for Police.

25. Memorandum. From The Native Office, Wellington re the payment of public moneys within the meaning of the Public Reserves Act 1878. 17 Sept. 1880

26. Memorandum. Breech Loading Rifle. Hand written and signed C. B. re the efficiency of the regulation rifle against the natives. Undated E28.41 (ARC2002-74t Electronic transcript available)