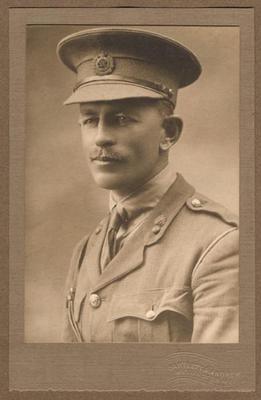 In 1910, Blanche travelled to England as a companion to Miss Amy. In January 1919, while in England, Blanche married Norman Marshall Halcombe (pictured),formerly of Urenui who was serving in the Royal Flying Corps, British Army. Three weeks after the ceremony, Norman tragically died of a sudden illness. Blanche returned to New Plymouth where she lived for the rest of her life. Blanche's death was equally tragic. She died when fire swept through her house on the 10th February 1961.

The collection of papers includes Blanche Halcombe's personal notes, letters and a diary of an overseas trip (1910-1913) and correspondence and notes on Swainson/Turton genealogy.
See full details

Folder 1. Letters. From Blanche to family in New Zealand. 1910

Folder 8. Letters. Regarding Annette Devenish-Meares and Mrs Christobel Eaton Turner. Letters addressed to Bert Halcombe, including one from Lilian Ovenden. 1902 - 1938

Folder 13. Correspondence on the Turton family, includes watercolour drawings of a house and gravesite of Douglas N. Halcombe. Transcripts by F. Lambert of some letters.

Cover only of a newspaper cutting scrapbook. Edges burnt. Notes on Pelorus Jack.

2. Emphemera. Advertisements, business cards and notices from Britain and France

9. Account book. Has name A. Swainson on cover and on verso Dec. 1871, in different handwriting My daffodils 1937, contains a few gardening notes.

Metal plate. Press Club of San Francisco membership for Norman M. Halcombe, inscription on reverse: Presented April 7, 1915. God be with you boy and come back safe and sound.

Notebook. Includes accounts for the building of a new weatherboard cottage of three rooms. Unidentified.

Is there a book titled Burnt Eggs about Blanche’s life Or any other publications available please. My mother was Margaret Henderson née TURTON

Have recently cleared my mothers house out and came across photographs taken by Annette Clementina Devenish-Meares (Turton) my grandmother from 1913 onwards. Cairo 1915 to 1917 Wellington Mounted Rifles, Camel Cor. & on to 1960 plus Taken by Norman Halcombe RFC 1915 to 1919

I am the granddaughter of Jabez Turton who lived in Australia but had come from Canada. He took some photos in yout collection. My mother was Nona Turton. Her mother was Laura King Turton. When my mother left Australia at aged 22 she left the family photos behind( both her parents had died:) it would be wonderful if you had any photos of the family