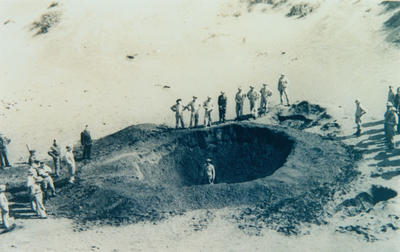 Production date
1988-1999
1940-1949
Description
Born in New Plymouth 1925, C. George Wood was raised in Moturoa and, during the World War II, served as a sapper in the 2/C Section Bomb Disposal Group, NZ Engineering Corps.
The collection consists of two papers and photographs presented to the New Plymouth Shipping and Marine Society by C. G. Wood, March 1988. The first paper is titled "2/c Section Bomb Disposal Group". The second paper is titled "The raiders and Supply Ships"
Two newspaper clippings 1998 and 1999 describing the work of the squad and how Wood helped pull a mine off the foreshore at Belt Road and a photocopy of a clipping from an undated Midweek newspaper[?]. Pages from the Past by Murray Moorhead in which Mrs Naylor relates the same story.
See full details