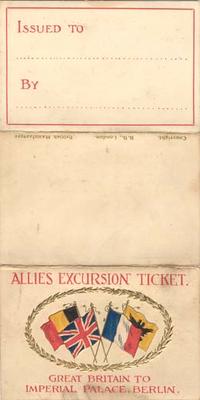 Production date
1916-1918
1910-1919
Description
Hughes was born in Christchurch in 1886. Trained as an engineer, he served on the Western Front during the World War I as a sapper in the 18th N.Z. Reinforcements. He saw action in Messines and Etaples, in early January 1918 he was hospitalised and sent to England to recuperate and eventually to New Zealand, where he was discharged in September 1918.
He married Olive Frances Price in June 1924 and farmed at Hillfoot, Oakura. He died 14 Dec.1965, aged 79 years and is buried at the Returned Services Graves, Te Henui Cemetery, New Plymouth.
The collection comprises four diaries with transcripts, describing daily events of a soldier serving in Belgium and France, letters to his family, ephemera, including paybooks and photographs, and a manuscript history of Oakura.
See full details

Ring binder. Includes clippings from newspapers and magazines of native plants. Many of the clippings are articles written by L. W. McCaskill. Undated.

(c) Certificate of Honour awarded to E. L. Hughes for the junior writing class annual examination. 1902. (d) Ration book. Issued to G. H. Hughes, Oakura October 1946. (e) Letter and newspaper clippings. To Mr Hughes from Mrs E. Campbell in reply to a letter by Hughes to the newspaper regarding the date of discovery of Dawson Falls by Thomas Dawson. 5 May 1848.

Postcards. Views of Australian locations, Albany, Western Australia, Jenolan Caves, N.S.W. and postcards of Aboriginal people, N.S.W., some postcards have been written on, circa 1914.

Postcards. Of Trentham Camp, Lower Hutt and the 18th New Zealand Engineers, plus a postcard of the ship HMNZT Willochra. Circa 1916.

Manuscript. E. L. Hughes diary 14 Oct.1916 to 14 Dec.1916 written while on board a troopship from Wellington, New Zealand to Freetown, Sierra Leone.

Manuscript. a. The Oakura story. Handwritten notes on stories and identities from the Oakura area sourced from various publications and personal reminiscence. Undated. b. List of common and botanical plant names. Undated.

Photocopy of letter sent to the Archivist, Taranaki Museum accompanying the transcripts and photographs copied by Y. Fitzmaurice. 22 Aug.1986.

Postcards. Views of localities in Scotland and England. Some postcards have annotations, circa 1917-1918. France and Belgium, circa 1917. Oatland Park House and New Zealand Hospital, Walton-on-Thames (Felix) and New Zealand Soldiers Club, London, circa 1917. Pictures from Sumner, Christchurch, N.Z. 27 June 1924 and assorted illustrations circa 1926.

Photograph. Group portrait of the 18th N.Z.E. 1916 at Trentham Military Camp. Names of group on the back of photograph.