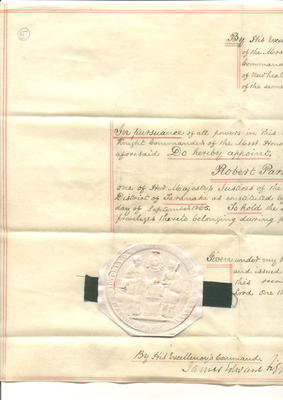 1. Invitation from Colonel Warlock and the officers of the 70th Regiment. Undated.

3. Letter of appointment of R. Parris as Provincial Treasurer, from G. Cutfield. 8 Apr.1857.

4. Letter. To R. Parris recognising his resignation of his position as Provincial Treasurer, from G. Cutfield. 29 June 1857.

5a. Copies of letter from William Courtney to B. H. Darnell. 18 Feb.1861 and 18 Apr.1866, concerning personal allegations (debts of honor) against Courtney.

5b Letter. To R. Parris from B. H. Darnell concerning allegations of land speculation undertaken by William Courtney and his seduction of Darnell's wife at Manutahi in 1880. Darnell asks R. Parris for assistance to see Courtney made bankrupt. 28 July 1886.

6. Letter. Of thanks from R. Carey on behalf of Major General Pratt for services rendered. 31 Mar.1861.

8. Proclamation appointing Robert Parris to be Major (unattached) in the New Zealand Militia. 6 May 1865.

9. Proclamation appointing Robert Parris to be Civil Commissioner for the District of Taranaki. 2 Sept.1865.

10. Proclamation appointing Robert Parris to be a Judge of the Compensation Court for the Colony of New Zealand. 24 Aug.1866.

11. Appointment of Robert Parris as Resident Magistrate for the District of New Plymouth. 21 Jan.1868.

13. Letter. To R. Parris from W. Rolleston, Department of Justice, Wellington offering thanks for his acceptance of a temporary position as Judge at a sitting of the Native Land Court at Patea. 22 July 1880.

14. Letter. To Major Robert Parris from the Under Secretary, Colonial Defence Office, Taranaki appointing him as Major (unattached) in the Taranaki Militia. 15 June 1865.

15. Copy of Letter. To Colonel Stapp from R. Parris outlining his service over six years with the Imperial Forces during the New Zealand War and asking for his named to be retained on the New Zealand Army List. 8 Aug.1888.

16. Letters (2) (with envelope). From James Forbes, Melbourne, to Robert Parris asking for information on the history of the Parris Family and the relationship his family (Forbes) has with it. 19 Feb.1898, 9 June 1898.

17. Letter. To the manager New Plymouth Savings Bank from R. Parris, tendering his resignation from the Board of Trustees. 30 Sept.1899.

18. Letter. From A. Weston, New Plymouth Savings Bank to R. Parris expressing the Board's regretful acceptance of his resignation. 4 Oct.1899.

19. Copy of minute passed at a meeting of the New Plymouth Savings Bank re Parris's resignation. Signed Paul B. Newton. 4 Oct.1899.

21. Typescript. Biographical information on Robert Parris from Edmund Lysons, Some lay personalities of St. Mary's Parish in the earlier years of settlement. 1952.

25. Pamphlet (2). (1) A narrative of some native troubles in Taranaki from 1854 to 1859 and The re-occupation of Tataraimaka in 1865. written by Major Parris. Printed from The Christchurch Press. Notes in margin indicate the article was dictated to H. P. Richmond by Major Parris. (2) Photocopy of same article with note in margin: Hilda Hamerton from Grandfather.

From a London newspaper; (7) A description of a Waddell-Dudley marriage ceremony. Undated.