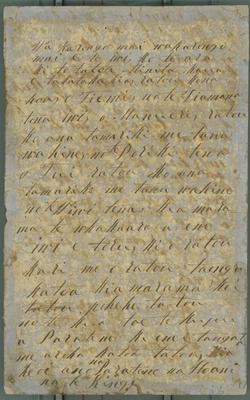 Production date
1837-1868
1800-1839
1840-1849
1850-1859
1860-1869
Description
Ordained by the Bishop of Lincoln in 1837, In 1859, the Rev Henry Handley Brown with his wife Sophia and their eleven children came to New Plymouth on board the ship 'Eclipse'. With the exception of two sons the family went to Nelson during the land wars. He and his wife settled at Omata where he became resident clergy, attached to St Mary's church. He was also itinerant vicar for the area. He developed a close relationship with the Maori community and in March 1860, at the time of the battle at Waireka, the Maori people protected his family, home and property by posting a panui on the gate to his residence.
The papers include documents relating to his life in the church, personal papers and the notice pinned to his gate in March 1860 protecting him and his family during the Battle of Waireka.
See full details

a.) Admission to holy orders of Henry Handley Brown as Deacon at the Parish Church of Buckden, Huntingdon. 21 May 1837.

b.)Admission to Office of Stipendary Curate in the Parish Church of Burton Pedwardine. 21 May 1837.

d.) Copy of the admission to Office of Stipendary Curate in the Parish Church of Burton Pedwardine. 21 May 1837.

e.) Admission to holy orders of Henry Handley Brown as Priest at the Parish Church of Buckden, Huntingdon. 17 Dec.1837.

f.) Institution of H. H. Brown to the Vicarage of the Parish Church of Burton Pedwardine. 17 Dec. 1837

i.) Testimonial of esteem from the parishoners of Burton and Howell to Henry Handley Brown on his leaving England, for the purchase of an estate in New Zealand. Contains list of subscribers. 25 Oct. 1858.

Panui. The notice pinned to his gate in March 1860 protecting him and his family during the Battle of Waireka.

Reproduction image of reverse side of panui (above).

Photocopies and translations of the Panui of March 1860.

a.) Account for Master Henry Brown at the Schools of the United Bretheran or Moravians at Neuwied. 31 Dec.1853.

e.) Typewritten letter to Peter (?) regarding the Brown family Bible.

g.) Letter thanks to Colonel Warre, Rev. Henry Brown, Mr Parris and the inhabitants of New Plymouth from the passengers of the ship "Lord Worsley", wrecked on the Taranaki coast near Opunake. 15 Sept.1862.

h.) Copy of the letter to Colonel Warre...

q.) Letter. From Henry H. Brown to his nephew re the Handley family.

s.) Letter. Henry Brown [Jnr] to his cousin informing him of the death of Henry Handley Brown. 4 Oct. 1893

t.) Commission for Francis Edward Brown to the Militia, County of Antrim. 12 Jan. 1858

x.) Photocopies of documents and correspondence regarding the Brown family, the documents in Folder 5, a letter from Giselle Byrnes to David Bruce, New Plymouth re the term Philo-Maori. Text of Daily News newspaper article written by David Bruce 8 Feb. 2003.