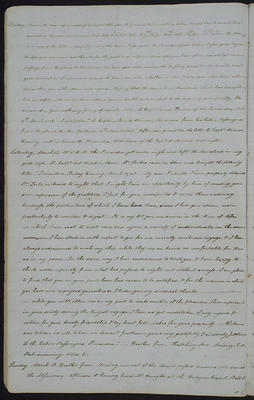 Production date
1841-1888
1840-1849
1850-1859
1860-1869
1870-1879
1880-1889
Description
Josiah Flight was born in Devonshire in 1800 and came to New Zealand on the Timandra in 1842 with his wife Sarah Anne and child Anne (Annie). His two younger daughters Sarah and Katie were born in New Plymouth.
Josiah was one of the first Justices of the Peace and was appointed Resident Magistrate and Coroner of the district in 1852.
Flight is recorded as having land in Weekstown (now known as Strandon) on the corner of Nobs Line and Devon Road and later they were one of the first families to settle in the Bell Block area, near the Mangaoraka Stream.
He took an active part in the flax and ironsand industries and lobbied for the construction of a harbour at New Plymouth. He died 7 March 1884.
The papers consist of five diaries written between 1841 - 1852 providing an insight into the lives and living conditions during this period. Inward and outward correspondence and legal documents between 1848 - 1888.
See full details

ak. Appointment of J. Flight as Reisdent Magistrate of the Province of Taranaki, 29 Nov. 1867.

at. Memo of estimated losses and costs incurred by forced removal from his house at the Henui in 1860, dated 1 Feb. 1861.

a. List of furniture, fittings and articles of the New Plymouth Courthouse handed over to the Provincial Government, 1 July 1865 and 10 Oct. 1865.

i. Letter from R. M. Honeywill asking for postponement of the case Honeywill v. Pellow, 25 Mar. 1869.

k. Writ of complaint by John Duffin, Constable against Henry Thomas Yates of Brougham St. regarding a dangerous chimney. 24 Mar. 1870.

l. Affidavit of William Samuel Allen, Pound-keeper of Lower Mangorei for sale of mare, impounded by Henry King,12 May 1871.

m. Precept for the appointment of James O'Brien as a Special Constable, 13 Sept. 1872.

n. Discharge of James Torry, Labourer, late of Waihi from jail on the affidavit of William Bosworth, Goaler. 30 June 1873.

p. Copy of order for sale of a horse by William Samuel Allen, Pound-keeper, dated 9 July 1874.

aa. Statement from Harry Eyre Henry in the case of Duffin v. Carrick for drunkenness that occurred on the 11 July 187?.

ae. Letter. from constable at the Police Station, Foxton for expenses incurred attending the court at New Plymouth in the case of Regina v. Hori Naeroe (?). Dated 7 May 1883.

b. Appointment of Josiah Flight as Sherrif of the District of New Plymouth. Dated 21 Sept. 1858.

c. Appointment of Josiah Flight as Acting Collector of Customs at the Port of New Plymouth. Dated 28 Sept. 1860.

d. Official notification of J. Flight's appointment to the position of Collector of Customs. Dated 28 Sept. 186

k. Draft of letter to C. W. Richmond discussing the death of Rawiri and the hostilities at Ninia Pa. Dated 16 Jan. 1858.

l. Draft of letter to C. W. Richmond discussing hostilities in the New Plymouth area and the influence of Ihaia and the Waikato tribes. Dated 22 Mar. 1858.

k. Notes written in pencil, appear to have a legal context. Undated.

n. Notes written in pencil, appear to be a chronology of events from February 1860 to May 1860.

a. List of articles in medicine chest, their uses, properties etc.

b. Letter addressed to Mr Flight, New Zealand House, Plymouth, Devon. Instructions on use of medicines. Dated 2 May 18-?.

23. Handwritten journal of poetry. Some loose excerpts of poetry inside front cover (6 items).

24a. Pamphlet. On the therapeutic effects of Charcoal in epidemics of measles and cholera. Dr Peter Wilson. Inscribed with annotation "Josiah Flight Esq. with the author's compliments" 1854