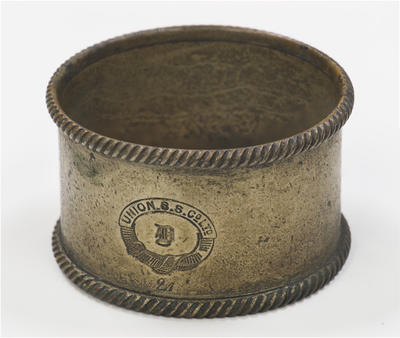 Description
A serviette ring with a coiled decorative edging. " UNION.S.S.CoLTD / 21" stamped onto the main body. The first line is in the upper half of a band which is decorated in the lower half.
See full details

Credit line
This napkin ring was salvaged from the wreck of the Hawea in 1930 just before the wreck was detonated. According to family tradition the salvage diver, William Hearn, surfaced from the wreck with a sack full of salvaged items but as he was climbing onboard he slipped and most of the material fell back into the sea and he could not be bothered recovering it again. Two Taranaki racehorses and the reputation of the fledgling harbour at New Plymouth suffered when the Hawea sunk in 1888.
The ship, a 462 tonne steamer, came to grief in June when she was struck near the stern as she swung towards shore while attempting to berth.The 11 passengers were rescued as the ship started taking on water but the two Taranaki racehorses on board, Allegro and Armourer, proved more of a challenge. Armourer made it safely after being dropped from a sling into the sea but Allegro was not so lucky. Attempts were made to tow her by a halter but it slipped and she swam out towards open sea. She was snared again by a rope and towed towards the beach but was eventually turned by the surf and drowned. While the ship’s captain blamed the harbour for the disaster an official inquiry gave no clear answers. A thorough survey of the area found no rocks or other obstacles and the captain was also cleared of blame. The wreck of the Hawea caused headaches for dredges and divers in the harbour for many years