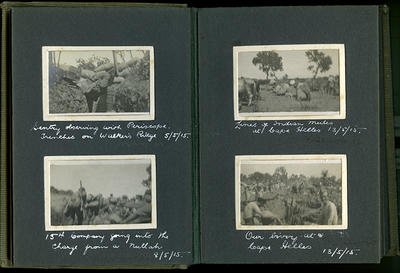 Production date
1915
1910-1919
Description
Green photograph album containing 48 silver gelatine snapshots taken by Frederick William Watson during his time on the Gallipoli Campaign at Egypt, Gallipoli (both Anzac and Cape Helles) and Lemnos between 11 April 1915 and 15 August 1915. Each photograph is captioned and dated. There is an inscription on the inside of the front cover of the album and part of letter from Watson adhered to the inside of the back cover.
See full details