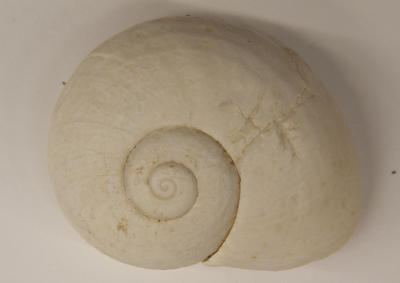 Description
Paryphanta busbyi watti. A Kauri Snail, white in colour and with slight sand/dirt build up in the hollow shell. Contained in a small cardboard box with a white label with black printed text that reads "Paryphanta busbyi watti (Powell, 1946) / Fossil form in consolidated dunes, / Cape Maria van Dieman". A96.825 is also contained in this box.
See full details

Credit line
The Kauri snail is an endangered land snail. This species was restricted to three locations on the Aupouri peninsula and is the rarest of the two subspecies. They are carnivorous snails eating earthworms, insects and other snail species.They are highly dependent on humidity and plant material