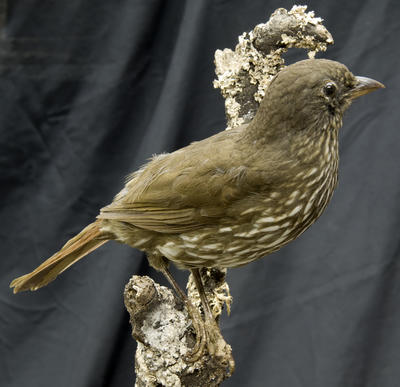 Credit line
The ancestors of the piopio or New Zealand thrush would have flown here from Australia millions of years ago. The piopio was related to the colourful catbirds, bowerbirds, and birds-of-paradise of Queensland and Papua New Guinea. However, it did not share the gorgeous feathers of its northern cousins. At the time of Pākēha settlement, piopio were found throughout the forests of New Zealand, including Taranaki. However, by the turn of the century, they were almost extinct. Piopio died out so fast that few specimens can even be found in museums today. The last known sighting of a North Island piopio was in 1902, near the northern Taranaki town of Ohura. It was shot.